Mt. Calvary Baptist Church was founded and incorporated in 1928 under the pastorate of the late Rev. F. S. Stubbs. At that time the church was located on 85 Concord Street in the South End of 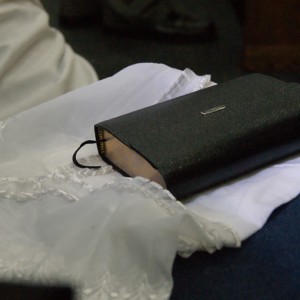 During this time God was preparing another Pastor for The Mt. Calvary Baptist Church, but this person did not consider himself a pastor or even a Christian. In 1948 God began to organize his plan. Parnell Baxter was asked to take over the “Progressive Bible Class” which was under the direction of Frank Vaughn. Parnell Baxter knew that God would obviously have to do a fast work in his life. That prayer was answered and he made a commitment to accept Christ as his personal Savior. In 1950 it was prophesied that God would give Rev. Baxter a church. This prophecy came to pass 16 years later when Rev. Morris Grady ended his pastorate at the Church. It was Rev. Grady who appealed to Rev. Baxter to take the church. After Rev. Baxter consented, knowing that this was fulfillment of the earlier prophecy, Rev. Grady gave him the charter and whatever money was in the treasury at that time.

God was not finished with this church which was now located at 541 Massachusetts Avenue in the South End of Boston. Only God could orchestrate this type of church planting idea. In 1948 God began to put the church together as we know it today. The Church was resumed with 4 ministers, known as the 4B’s, and their families, which eventually grew to an average about 13 children each. They are the late Reverends Parnell Baxter & Johnnie Brown as well as Reverends George D. Bullock Sr., and Richard Bullock, Sr. These ministers and their wives lived in the same house on 29-33 Rutland Street in the South End of Boston. Just as the early church did, they began to study the Bible, pray, and fellowship from house to house. They patiently waited on God to establish them as Christians and then as a church. Their prayer time was all hours of the day and night, on the beach, in the car as they traveled, and the likes. God was building a foundation that would remain for many years. These ministers and their wives and children lived together, prayed together, and worshipped together. They had an undying fixation on Jesus Christ and His word.

Rev. Parnell Baxter was blessed to enjoy the 4th generation in the church. Shortly after celebrating his 41st Pastorate Anniversary, our beloved Pastor went home to be with the Lord on October 8, 2008. The late Rev. Johnnie Brown was the dedicated, faithful Assistant Pastor and was considered his right-hand man until his home-going on September 18, 2000. After serving for a short time as the Interim Pastor, Rev. George D. Bullock, Sr. was installed as the pastor of The Mt. Calvary Baptist Church on September 19, 2010. Also, Rev. Betty Baxter, the late Pastor Baxter’s wife, became Co-pastor and Rev. Richard Bullock, Sr., Associated Pastor. As in all established ministries there have been many obstacles that have come to shake the foundation of this church, but through it all it has remained intact as God has increased our faith and love through these times.

“The effectual fervent prayer of a righteous man availeth much (James 5:16).”

Become a part of the Men's Ministry and see how you can be a more effective man in your life. Likewise women, take part in the Women's Ministry and gain support for everyday living as a woman.